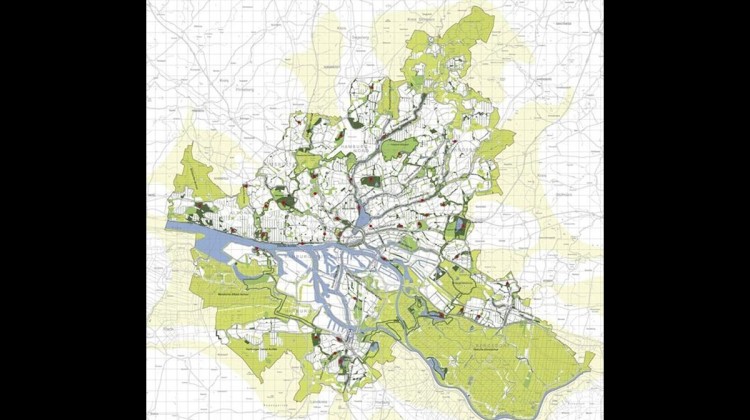 If you’re up to date on your green news, you’ll know that green capital Hamburg, Germany has planned a major pedestrian & cyclist initiative. Every mainstream publication I’ve read begins this story with something like Germany, home to (choose one) BMW/Mercedes/the Autobahn BANS cars! And half the following comments read: That won’t work! or That’s not true!

It’s not exactly true, but close enough: within 15–20 years, Hamburg’s Grünes Netz program (Hamburg’s Green Network) program will connect the city’s parks and green areas into a complete, car-free network for pedestrians and cyclists. The parks, gardens, squares and other green areas currently encompass about 40% of the city, and this unique network plans will build a unified system available to all residents – from the north, south, inner and outer reaches of the city.

The city has several goals with this effort. One is to address the general problem of global warming and reduce emissions. A more direct goal is to combat flooding. Hamburg’s average temperature has increased from 7.8° to 9.0° Celcius (46.0–48.2° Fahrenheit) over the past 60 years, sea levels have risen 20 cm (nearly 8 inches), and climate change has brought an increase in precipitation. Flooding is a growing problem, and one of Hamburg’s goals with Grünes Netz is to ease flooding through larger green zones and less asphalt.

Hamburg is already one of the greenest cities in Europe, and currently celebrates the 100 year anniversaries of its parks Winterhurder and Altona. This fabulous green experiment called Grünes Netz will propel the city far beyond anything London, Amsterdam, or other cities have attempted.

Have you lived in a place where cars are unnecessary? It’s easy to get used to. Let’s hope other cities take note, and take action.