Home → DIY → Is there a thermoelectric generator in your future? 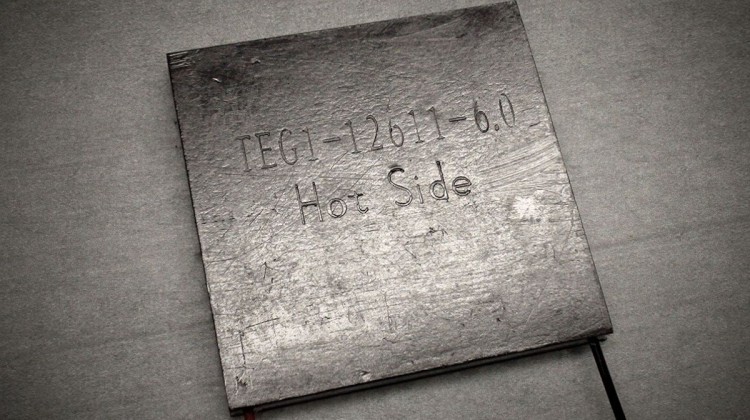 Imagine: you wake in the morning, light your wood stove, and place a kettle on it to boil. After a few minutes, when the water has boiled and you’ve fixed your tea, you reach down and plug your radio into the stove.

How is this possible? Your stove has no moving parts…yet it can generate electricity from the heat of the fire.

Before we look at these products, let’s examine the machine itself. What exactly is a thermoelectric generator?

The science behind the machine 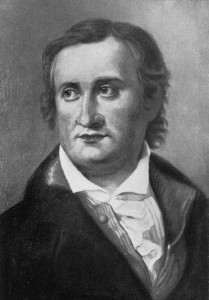 A thermoelectric generator is a simple device that converts heat into electrical energy through a phenomenon known as the Seebeck effect.[1] This effect takes its name from Thomas Seebeck, physicist, who discovered the principle in 1821.

A thermoelectric generator requires no moving parts because it is a temperature difference that creates electricity.

Thermoelectric generators use two dissimilar conductors or semiconductors – basically, two different metals connected to form a loop with two junctions. To use the device, one creates a temperature difference between the ends. And that’s all it takes! When one junction is hot and the other is cold, a circuit is created through which an electric current will flow. 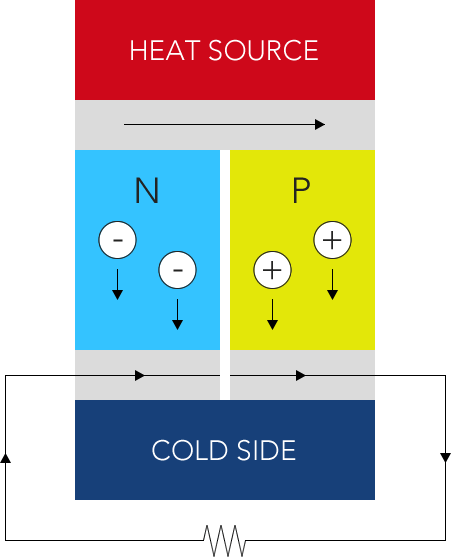 Confused? It’s all in the electrons.

The electrons in materials like ceramic are bound closely to their atoms and make ceramic an excellent electrical insulator. The free electrons in metals act like gases that can quickly move through their solid containers – for example, electric cables, or the two metals within a thermoelectric generator.[2]

In a thermoelectric generator, each metal contains free electrons with different densities, and these electrons create the current when they diffuse across the junctions. As the temperature difference increases, the level of current rises in turn.

Thermoelectric generators in the 20th century

By the 1920s, distant areas of the Soviet Union saw the widespread use of battery-free radios powered by thermoelectricity. These radios came equipped with bi-metal rods, and by placing one rod in the fireplace and the other outside in the cold, one could produce the electricity required to operate the device. Both the Soviet Union and the USA manufactured kerosene-powered radios during the cold war that operated using the same principle.[3]

Beyond radio applications, researchers found it difficult to create satisfactory consumer solutions that utilized thermoelectric generators. The efficiency of the generators slowly improved but remained low, and by 1970 thermoelectricity had fallen out of favor. 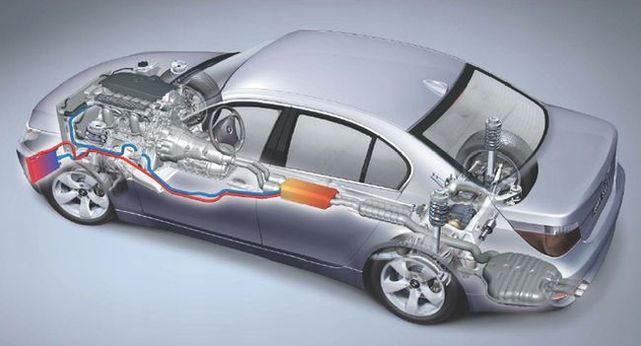 Rolling into the future

It is said that the history of thermoelectricity is a series of discoveries separated by 20-25 year lulls when little happens. About 20-25 years after the 1970 lull, interest in thermoelectricity revived – driven partly by the increasing desire in the 1990s to conserve resources.

Since then, researchers have again searched for suitable applications for this device. Human activity expends large amounts of waste heat, and the beauty of thermoelectric generators is that they can be used to recover this heat from anywhere. The long-standing problem of low efficiency in these generators remains but may be changing with today’s technology.

One obvious place for thermoelectric solutions is within automobiles –because cars produce a lot of waste heat.

In the near future, we will most likely see thermoelectric generators equipped on Volkswagen and BMW models.[4] BMW has successfully driven a thermoelectric-equipped prototype more than 12,000 km, and Volkswagen has a generator than produces 30% of the car’s electrical requirement and reduces fuel consumption by more than 5%.[5]

While researchers have previously tested and discarded several prototypes, these ones look like they will make it all the way to production.

If you want to use this technology today, there are a number of products available. 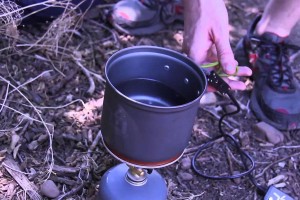 A few different USB-equipped cooking products are on the market including this model: PowerPot V

. PowerPot V is exactly what it looks like – a cooking pot with a (fireproof) USB cord coming out of its side. To produce electricity, fill the pot with cold water and put it on the fire. The PowerPot V 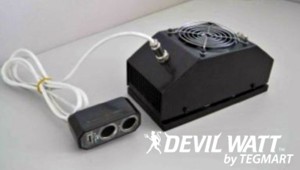 The Devil Watt DW-ST–15W Camping Cook Stove Thermoelectric Generator is similar to but more powerful than the PowerPot V. The Devil Watt device is placed directly on the fire and generates enough electricity to power a 12V DC device. It also has 5V DC USB output which should charge a variety of USB devices such as smartphones. 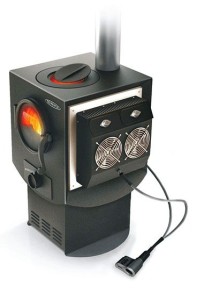 The Indigirka model by Thermofor contains a built-in thermoelectric generator that starts about 10-15 minutes after ignition. Thermofor states that the stove generates a direct electric current of 12 Volts and up to 60 Watts. “The electricity generated by the stove,” states Thermofor, “is sufficient to power 2 or 3 energy-saving bulbs, charge a notebook battery, or that of a cellular or satellite telephone, a radio, DVD player, or other portable energy-saving devices.”

DIY – how to make a thermoelectric generator

It’s fairly easy to experiment with thermoelectricity – just keep in mind that you’re working with a low-efficiency device, and the thermoelectric module can be costly. 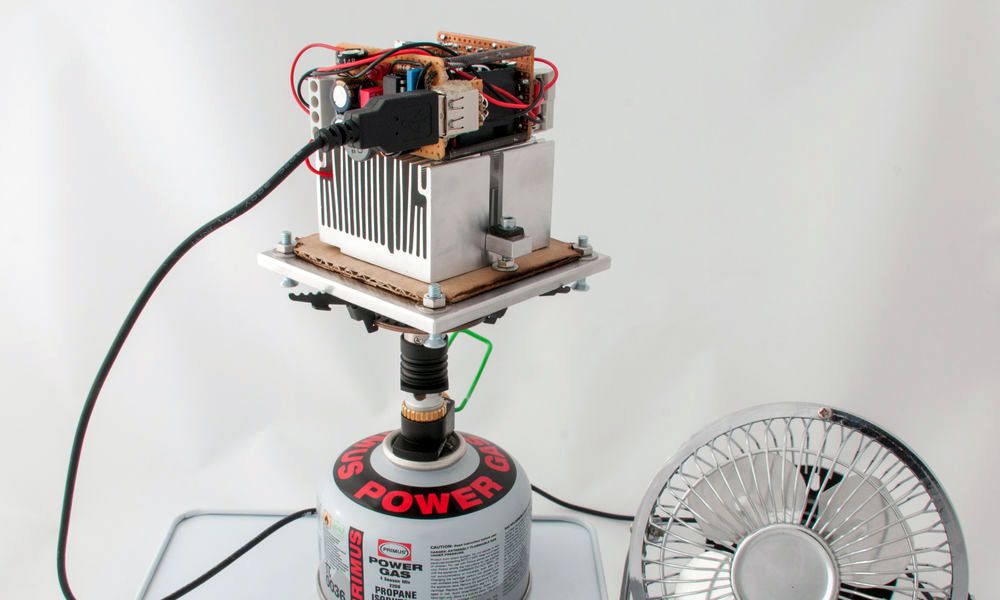 Here are three links to get you started:

Note that the Backpacking Light and some of the other thermoelectric tutorials online use Peltier cooling modules instead of Seebeck generators. Peltier cooling modules are related devices that make use of the same physical process as Seebeck generators. This process is sometimes referred to as the Peltier–Seebeck effect. Research the Peltier effect to learn more about this.

Widespread and practical applications for thermoelectric technology have long existed just beyond our reach, but advances in technology may now bring us new and easy thermoelectric solutions that answer our energy needs.

Let us know if you do any experimenting with thermoelectricity – we would love to see what you make.